intu is Indonesia's first cryptocurrency wallet and trading platform designed specifically for mobile devices. The app was first released in April 2020, and it has expanded rapidly in the last few years, with over a million monthly active users. The app's main goal is to make it simple for new crypto investors to explore, study, and invest in cryptocurrency.

The Commodity Futures Trading Commission has formally registered and overseen Pintu BAPPEBTI. The startup claims to have 100 active members after officially launching in late March 2020. Pintu has also formed alliances with communities and media partners in the Indonesian blockchain ecosystem.

What is the history of Pintu?

How much can I earn?

Are my assets safe with Pintu?

Pintu's platform, launched in April 2020, allows users to trade, analyze, and handle cryptocurrencies. It has extensive trading tools, a simple user interface and experience, and high security. Pintu has its Academy as an educational program provided by the firm. Pintu's founder and CEO, Jeth Soetoyo, are rushing to turn more Indonesians into cryptocurrencies, but the risk could arise. 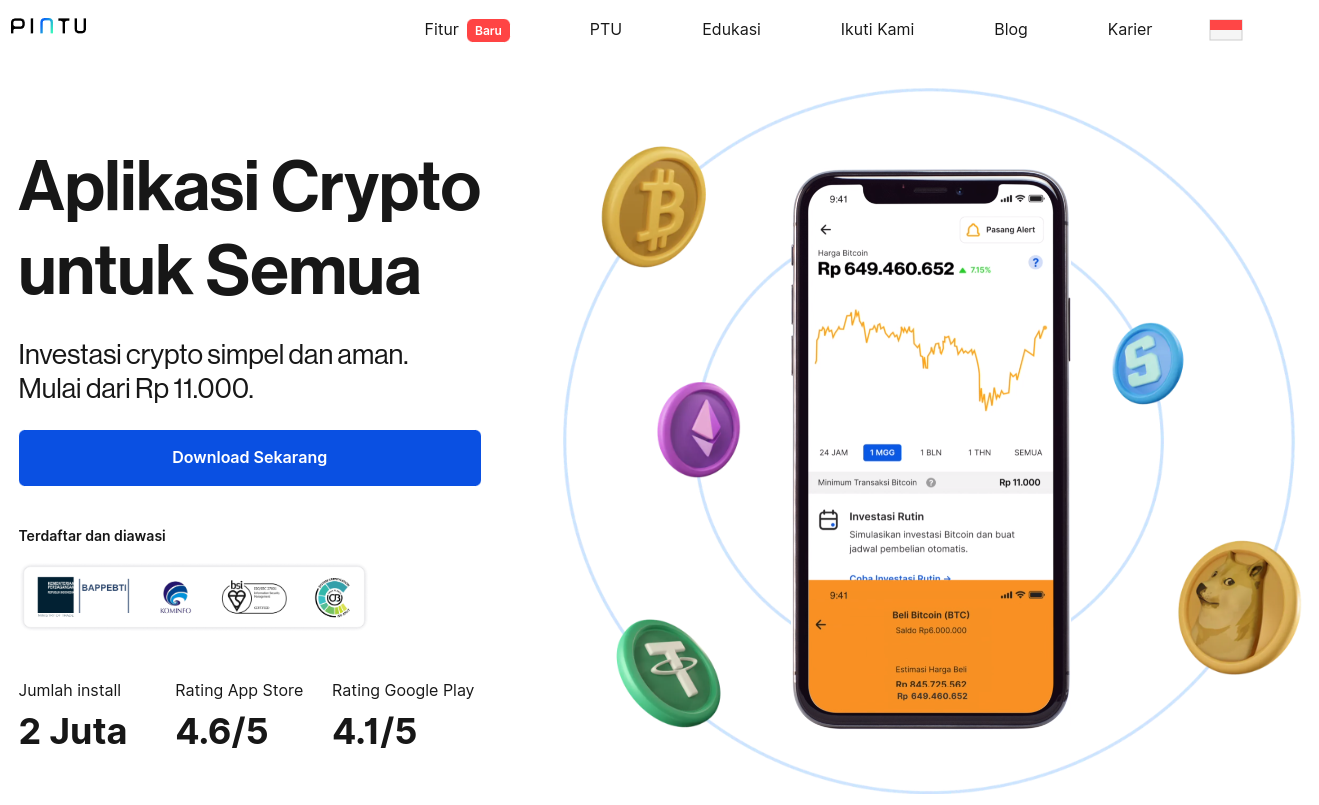 What is the history of Pintu?

Jeth Soetoyo, Founder and CEO of Indonesia's foremost blockchain technology business, Pintu — the Indonesian word for "door" – believes that blockchains will change finance worldwide. He describes his first encounter as a student in the United States. He stated that "At the time, I transferred my tuition utilizing a blockchain network instead of the traditional banking system and discovered that it was orders of magnitude faster and less." "That early impression sparked my curiosity in how blockchains potentially transform finance by removing obstacles to participation in global financial networks," he says. "In my opinion, blockchain will have the same influence on finance as the Internet did to share information and data."

At its foundation, blockchain is more than just a shared, unchangeable ledger that streamlines the process of monitoring assets and recording transactions in a business network. Blockchain is critical in laying the groundwork for practically all cryptocurrencies and their crypto worlds. This is especially true for cryptocurrency wallets and trading sites. So this is where Jeth Soetoyo enters the picture. Jeth and his colleagues at Pintu, who are immensely enthusiastic about leveraging blockchain to promote positive change in Indonesia, have assisted over a million customers at the beginning of investing in cryptocurrencies.

"Most users are youngsters and Generation Z, notably those aged 18 to 35." "They also notice an increasing number of more senior groups between the ages of 36-50 using Pintu since they found the program to be very straightforward," Jeth explains. The following are extracts from an interview with Pintu's founder and CEO conducted by Prestige Indonesia. Pintu's exchange supports trading for 16 cryptocurrencies, such as Bitcoin and Ethereum, and it wants to add more coins, including popular NFT tokens. Pintu is introducing new features and services, such as Pintu Earn, which pays interest on a wide range of crypto assets, and e-wallet integration for simpler withdrawals and deposits.

How much can I earn?

You can earn up to 17.5 percent annual percentage yield (APY) on funds saved in your Earn wallet. You can top up and withdraw your balance at any moment.

The following table lists products that pay interest on a flexible terms basis:

Are my assets safe with Pintu?

Pintu is a cryptocurrency exchange licensed with BAPPEBTI and regulated by Kominfo. If something unexpected occurs, Pintu will warn its users so that they can withdraw their funds to a bank or transfer their crypto assets to another wallet.

The KYC verification process is quick throughout business hours (daily, 08.00 – 23:59) and only takes 10 minutes.
Delivering crypto assets to other Pintu users is completely free. Nevertheless, transmitting cryptocurrency to the blockchain will cost a gas tax according to the blockchain's amount. The gas fee applied to your transaction is the fee in effect at the transaction time; however, please remember that gas fees are liable to change quickly. On the confirmation page of a send transaction, you can get the most current data on gas fees. You can also acquire the most up-to-date information on gas prices by sending a message to the Pintu Telegram group with "/fee" or visiting pintu.co.id/fees.
Pintu charges a withdrawal fee of Rp4.500 for each transaction.
Pintu accepts deposits made with e-wallets. Pintu currently supports the following e-wallets: –

Mike is a Crop Crop staff writer based in the UK, covering the best rates for cryptocurrency earning and borrowing products. When not at work, he's likely putting his latest car project back together.